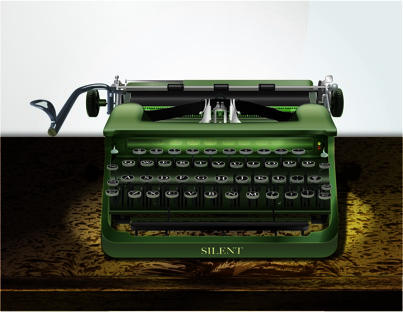 This illustration has been in the works for well over three months. I started out by wireframing everything in Illustrator CS3, then moved on to color and shading/highlighting after everything was looking just right. The drawing also incorporates a few parts that I built and rendered using Blender 3D, a little bit of an experiment on my part but one that worked out pretty well. The typewriter is an old Smith-Corona (produced in 1932), not my own, in need of a little TLC and a very pretty writing machine.

Being relatively new to Blender 3D (arguably the best in free, open-source 3D software), I wasn’t quite sure how it would suit my purposes. Thankfully the Blender 2.5 public beta has a snappy new GUI that makes working with Blender a LOT less convoluted. Everything I produced in Blender could be drawn in Adobe Illustrator, with actual reference close at hand, but how often do you get the chance to learn something from scratch? The Blender community provides great documentation, and every time I hit a wall I could pretty much count on there being a video tutorial to walk me through my issues. Thanks to BlendertutsNewbies.com in particular, Kernon Dillon is super good at relating modeling techniques and knows the software inside and out.

If you know me you know that 3D graphics are not a big deal to me, as a rule I’m less likely to enjoy a movie if it is over the top with CGI. That said, 3D is in its embryonic stage, and the merging of live action with 3D is far from seamless or believable in many cases. It is time consuming to produce, and resource-draining to run (Blender crashed at least a dozen times rendering small parts for Corona on my meager MacBook). BUT it is super handy when you are recreating materials using different kinds of lighting and deciding how they might best reflect light or cast a shadow. The software is getting better by leaps and bounds, and already you can see that big cheeses like Adobe are taking notice.

This illustration is on the market. Pricing is, as always, dependent on context. Different licensing = different pricing. Let me know if you have a special use case, I would be glad to accommodate. Enjoy!